I started and finished this horde of zombies for my Kings of War Undead army this weekend - from sprues to "ready to multibase" (that's why the round parts of their bases are not painted - they are going to be clipped off).

I thought I'd post a tutorial on how I did these guys in case anyone finds it helpful, given it can be a real slog to paint up tons and tons of zombies and skeletons!

First though, a word about the mindset I employ when painting large units of zombies or other creatures (like Skaven). My approach is basically to go for an effect that looks cool as a total unit, rather than spend a lot of time on each figure individually. It's just not efficient to paint these guys individually and worry about blending and highlights. Plus - they are zombies! They should look messy and gross (but "purposefully" so - not just a giant mess of colors). I should also mention an airbrush helps immensely although in this case I only used it for the priming stage.

I used a (new?) white primer from Vallejo. It's called "Premium" primer. In any case, it's the first time I've used it and WOW does it go on nicely. Great coverage, super fast drying, and airbrushes very easily.  I primed these white (most of the time I use black on models) because I'm going to use washes to do a lot of the shading/highlighting work. Also, using black would likely result in a big dark blob of figures, which is never visually interesting. 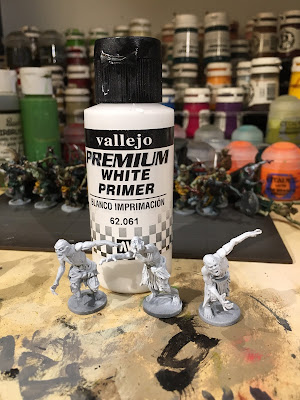 The next step is one where you have a lot of flexibility. Basically you want to find washes that have a tendency to darken the underlying primer or base coat. For example, the new line of washes from GW tend to color the flat areas of a model more than the previous formulation. I also find that Secret Weapon washes do that quite a bit. But that's OK - because the trick is to know when to make that work for you :)   In this case, I'm using various tones to create a range of flesh effects on the zombies. For example: secret weapon Stone, secret weapon Sewer Water, and Vallejo Blue Grey. The bluish-grey zombie skin looks pretty cool mixed into the more traditional "dead flesh" looking ones.

Apply this to all the flesh areas. Don't worry about being neat, although try not to let it pool heavily anywhere. Doesn't matter if it gets on the cloth areas right now. 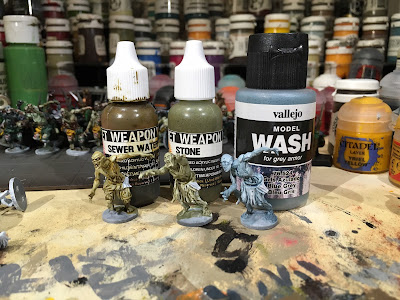 To add some variation to the flesh, I hit the various "wound" areas, mouth areas, and hand areas (sometimes I skipped the hands, as we are going for a bit of a chaotic mix here). When painting these, think about what zombies do: they grab handfuls of guts and shove them in their mouths. This makes them have bloody hands, mouths, necks etc.

I did this first pass with Secret Weapon Dried Blood. When I first bought this wash I thought it was kinda lousy and couldn't understand how to use it. Now I really like it - it creates a subtle red "sore" area around the wounds etc (tip: make sure you apply it around the wound, not just in the wound). 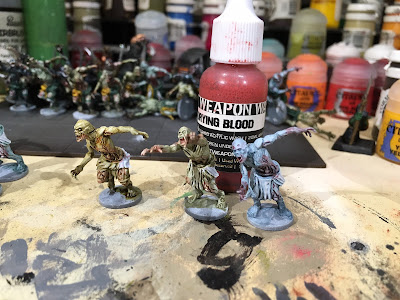 Once the previous step has dried, I paint the cloth on their waists/legs. Note: this part is highly dependent on the effect you are going for. For me, I painted them half green and half yellow to match my Skeleton Unit (I'll post that picture here as well, so you see what I mean). The idea being a whole army was destroyed and raised from the dead to fight for an evil necromancer, basically.  You can do them brown, red, orange - whatever you like.  No magic to this step.  Another thing I should note: for ~ 20 of them who would be in the front of the zombie crowd, I did highlight the green and yellow (~ 2 highlights for each). But for the 20 who will be in the back of the crowd...no highlights for them! Not worth the effort. 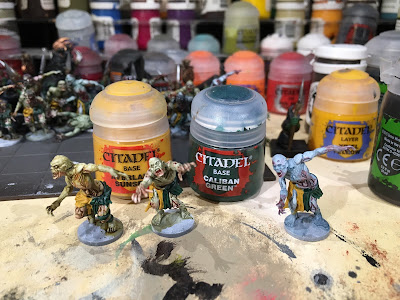 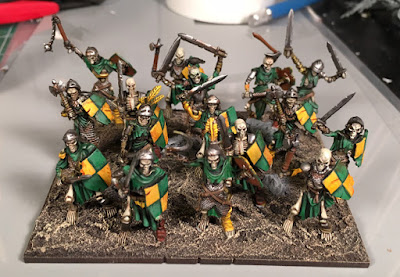 Once I finished the base coat of yellow and green, I washed with Aggrax Earthshade. I wanted them to look dirty and muddy. 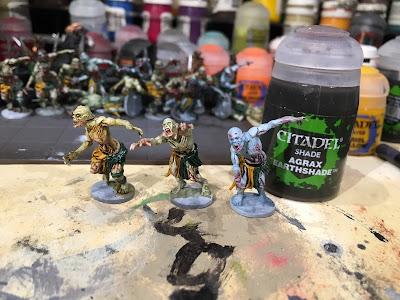 With step 5 dry, I went back to working on the wounds. I used Secret Weapon Ruby inside all the wounds, and the open mouths, to darken the red of those areas. 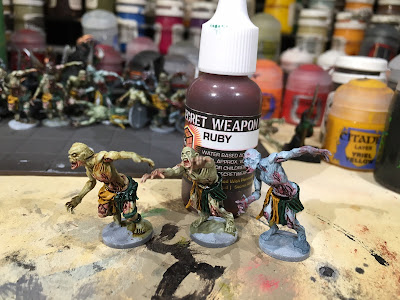 Very important step. This is where you are truly applying the "blood and gore" of the zombies. Think of the previous red steps as the zombies' blood and wounds, but this step is the blood and gore of their *victims*. So you want to put this on hands (sometimes up to elbows, mix it up a bit), mouths, necks etc. A little splatter here and there is fine too. I use an old, frayed brush to stipple this on. I used GW Blood for the Blood God which is a superb product, but I also occasionally dab a little Vallejo Black Ink onto my brush with it. This way, I ended up stippling on a mix of red and black, both transluscent. This will give you a very convincing blood/gore effect. If you look at blood and gore in movies, it often will appear very dark, almost black at times. It's not all bright red. And it is basically never an opaque, flat red - so don't use "red paint" to do your blood. It looks very unconvincing. 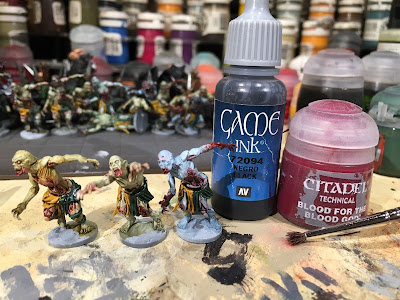 Really in the home stretch now - you could almost use them as-is at this point. Here, I decided to hit all the feet with Aggrax Earthshade, to pull out the details in the toes, and also because I doubt zombies wash their feet much. 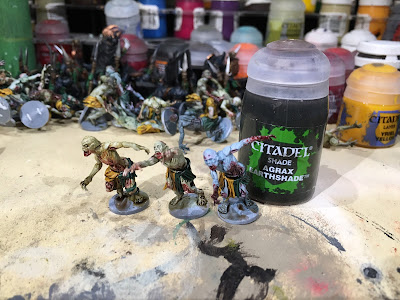 Last step, other than applying some matte varnish to the shiny cloth or other areas you think shouldn't be shiny (I suggest leaving the blood a bit glossy).  I washed their eyes/nose areas with GW Druchi Violet. That's a tip from Old Fogey that I decided looks really good on these.:)  I don't bother with eyeballs - this is a zombie horde, nobody is going to care about the eyeballs. 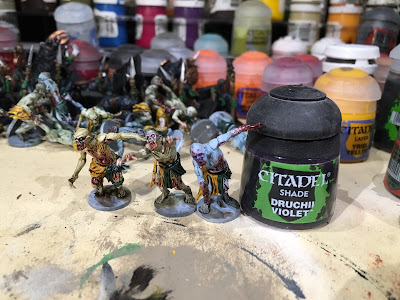 Here are all 40 of them, ready to be multibased (the MDF base I'm going to use is behind them). I will probably do another tutorial for that step. I have to figure out how I'm going to arrange them and what other "diorama" elements I want to add. Hope you found this useful! 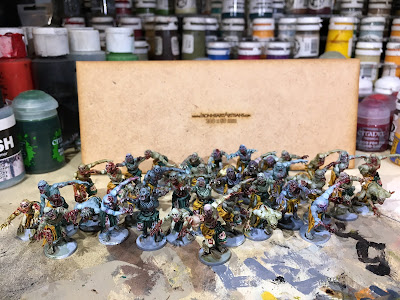