Kings of War has caught my eye

In addition to flitting between interest in Frostgrave, Dragon Rampant, Age of Sigmar (yes, really) and Warhammer 30K, one game that has really got my attention right now is Kings of War.

As usual, all of my interest is despite never having played it yet lol.

In the past it just struck me as a poor substitute for Warhammer Fantasy, and I have never been very enamored with Mantic's models or production values.

But with WFB basically dead, and Age of Sigmar very pricey and more skirmish oriented, I'm really starting to consider Kings of War as a game to dive deep into.

And in fact I kinda already have, lol.  I bought the Gamers Edition rules, then later the two player starter set (giving me another copy of the GE rules...), the full rulebook PDF, the Uncharted Empires supplement, and now I'm buying and painting models for up to three different armies. 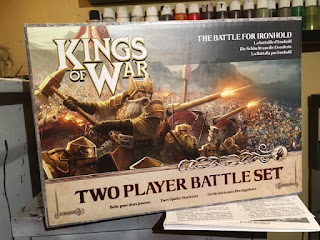 My main focus is on Goblins for now, but I'm looking to also do Undead and Dwarves so I have forces to use vs my son and/or other players.  Dwarves is mostly because I have some painted for WFB and they make up 1/2 of the starter set. Undead is because the Mantic zombies, ghouls and skeletons are among the models they make that I like the most.  Plus - undead.   Here's what I've painted for the goblins so far. I'm using Battle for Skull Pass night goblins because they are fast to paint (and no real assembly!) and yet very characterful - they are my favorite goblin models from any manufacturer. That said, I'd be happy to use some from Mantic but I've heard such bad things about their goblins in terms of soft details and bad molds etc. They aren't nearly pretty enough to warrant a long cleaning and prepping process basically.

My plan is to paint the first ~ 2 ranks a bit nicer than the remaining ranks - mostly that means one additional edge highlight and some tufts. It will make this project move along just a teensy bit faster. I also picked up a GW Ghorgon to use as a giant, although he's still in the shrink wrap for now.

I've also ordered some MDF unit bases - Kings of War is mostly based around specific footprints of units and you don't remove individual models as casualties. Therefore you can also do some really cool multi-basing which I will probably try my hand at. Even as an experienced hobbyist, the idea somehow daunts me. I think it's because I'm so used to painting models individually on bases.

So anyway, for now I keep reading the books and surfing KoW blogs and Youtube vids, and I do hope to play it at one point. I miss the rank and file type armies of WFB, but I don't miss the complexity (I glanced at 9th Age and holy COW - way too dense for me at this point in life). I also like the fact that this is a game you can play in ~ 2 hours. 3-4 hours is just way less feasible nowadays.
Posted by Minijunkie