Thoughts on Warhammer: Age of Sigmar

I thought I would weigh in on one of the hot topics in the hobby today: the big reveal of Age of Sigmar and the subsequent release (free, online and in WD) of the rules and "warscrolls" which are used to compose armies.  Full disclosure: I have read the rules, and impressions, and the WD issue, and some of the warscrolls, but have not had a chance to play it yet myself. 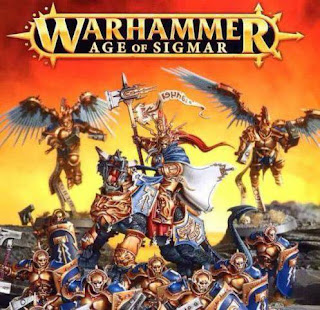 Before that, I want to point out that often companies are acting based on more info than the public have or are aware of. I'm very familiar with that scenario as I work for EA (video games) where business decisions (public facing ones) are often driven by information the public has zero knowledge of. So GW might know something we don't, per se.

I actually think that, on the surface at least, Age of Sigmar is the right move for Warhammer Fantasy. WFB simply wasn't able to keep a critical mass of buying and playing behavior in the customer base. If it was (like 40K), we would not have seen End Times and this big reboot/recreation of the game.

WFB is actually the game I enjoyed most from GW - I have played both it and 40K many times, but I always preferred WFB. I liked the ranked units, the fantasy flavor, the terrain and the magic etc. Just appeals to me more.

But even so, I eventually stopped playing. And the reasons for that, in my opinion, kinda touch on why this reboot happened:

- games were a long slog to play. I remember games taking 3-4 hours sometimes, with a ton of complex rules to remember and lots and lots of models to move around. Didn't help that I played Skaven. It was fun, don't get me wrong, but it was such a big commitment of time and energy (including setup and take down time).

- it was expensive to flesh out armies. Other than the more elite armies like Ogres, it takes so many models to fill up an army in WFB. That is expensive both in dollars and in time spent (hobby). Technically hobby time is fun time, but it could become a drag when trying to assemble, base and paint 200 skaven.


- the magic in 8th at times was simply not fun for one side of the table. Like purple sun or 13th spell.

So eventually my friends and I stopped playing, in favor of video games or Warmachine or Xwing. All were similarly entertaining while generally demanding way less time (and often less money) to play.

We live in a time where there are SO many different forms of entertainment competing for people's time and money. Mobile games, console and PC games. Netflix, other miniature games, TONS of cool board games. I think, frankly, that WFB was a product that no longer fit the changing tastes and behaviors of consumers in terms of time and money required to get into it and to play it. Sure, plenty of people still did, but clearly not in sufficient numbers to satisfy the business objectives of GW. Thus, they changed it.

I'm actually really impressed with how they've gone about this (for the most part. more on that later). They could have simply dropped WFB like a hot potato, and brought in AoS in any particular month. Rather than do that, they went through the entire End Times series of releases - with great, interesting fluff, models and books/rules. My only quibble is End Times products had a short life cycle per se.  In any case, IMO they gave WFB the death it deserved rather than just sweeping it aside.

So here comes Age of Sigmar and plenty of the current WFB players and GW hobbyists are taking a negative view of it. But I think it is actually exactly what GW should have done:

- they removed Army Books as a barrier to selling models. Now you just need the warscrolls, which are free and/or included with the models you want to buy. This was smart because books are heavy (shipping and distribution costs), need constant updating, leave "gaps" in the range that allow for 3rd parties to step in with model alternatives, are easy to pirate, and are "required reading" often before a person can ever figure out what to buy for minis. Now: buy what you think looks cool, including new releases, without worrying about the army book being released or how the entire army balance has shifted.

- they removed a lot of other barriers to model sales as well. You can mix and match armies, factions, unit types and basically play with whatever you think is cool. No more having to paint 300 clan rats or slave rats because you love the Screaming Bell and want to play it. No more core requirements. Lower minimum unit sizes (I think...). Go to the shelf, buy the models you dig, and you can pretty much play those models. Cross-factions gives up synergies (and theme) but is still feasible.  Really I think this is a very solid move for driving sales of their plastic men.  Oh and playing smaller games feels more feasible too - yes, you could still play small games before...but how rewarding that was is debatable given all the restrictions around heroes, items, and mandatory core etc.  Now you can play with some troops, a hero leader, a cool monster (read: not set up 400 models first) - and have some fun on a table that isn't 6 feet long and 4 feet wide to boot.

- they streamlined the rules. The rules were really complex (for the average joe) and unwieldy IMO. Complex does not equal great - in fact, simpler is often better (X-wing is an example that comes to mind). Suddenly I look at the rules and think "Hm....I could actually see playing this in under 2 hours finally!". It's also much easier to learn and introduce to new people. New people who have less patience for learning complex rules than ever before. Hell, the complexity of Infinity is the reason have lots of models and terrain and still haven't played it lol.

- The new models are simply that - new models. New army, etc. I think the Stormcast Eternals (hope I got that name right) look really cool, especially the ones we are just seeing in teases and leaks like the archers. The Khorne ones I can take or leave - they feel like more of what we've seen before. But all in all, very nice new models and in particular I think the new terrain coming soon looks stellar. 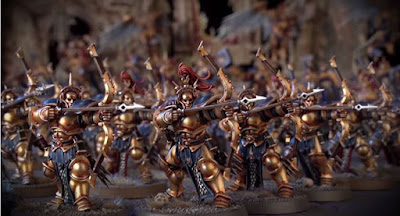 But it's not all roses and sunshine IMO. And here's why I think the community is way less receptive to this than they could have been:

- I think they went too far with the removal of restrictions. They basically blew it so wide open that people have no structure to grab onto. Naturally I'm talking about having no points cost. People like to have guidance on what to take in order to have a fair and balanced game against their opponent. That's why chess has two sides that are the same pieces :)  Points allowed people to roughly gauge if they were going to show up and just start removing dead models, or have a fun and challenging game (the best kind). This was, IMO, their biggest mistake here.

- They added in all the goofy/silly rules like talking to models, dancing etc. Honestly I'm not sure that was a good idea either - yes, it can be fun, but I think most people don't want to act or feel "silly" when playing a tabletop war game. It takes the material and makes it too jokey. That might be fun for really young kids (like my son, who is 9) but most of the wargamers I see these days are in their late teens if not older. Maybe even 30's and 40's. Basically, I could see having one or two of these goofy rules in armies that they are suitable for (like Orcs) but adding so many of them threatens to turn the game into a joke - which is NOT a good idea.  For my part, I plan to only paint/play units that don't include the silliness. I'm 42....I'm not going to ride an invisible horse.  Not outside the privacy of my own bedroom at least! ;P

So there you have it. To sum up:

- The world moved on and WFB was no longer the right product for the market.
- They killed it and gave it an honorable death.
- They designed the replacement to be REALLY accessible to new players.
- They made it really easy for existing players to use the models they already have (nice touch imo).
- They released a pretty cool new army (Stormcast Eternals).

- They may have gone too far in removing structure from the game.
- They added off-putting, goofy silliness to the rule set which may be turning off the older crowd.

All this said, I'm still very interested in playing some small, balanced games with some cool models hopefully in the near future.