Hi everyone (if anyone is left)!

Been a while, eh?  I've been pretty busy with work, home, and League of Legends (to which I am grossly addicted). Plus, I started working on a couple of pretty large kits which have really bogged down. For example, I have an Iyanden Wraithknight around 75% done but keep stalling out on it. It's such a bit kit :\

Another big kit (or so I thought before the Wraithknight showed up) is the Tau Riptide....

I finally finished this guy..decided to go with Farsight Enclave colors. This guy took me forever because I had him painted in a totally different scheme (remember the beige Broadside?)...Didn't like how that one was going, so I stripped it. Used brake fluid, and left him in it too long, so some parts broke off and/or I proceeded to lose them lol. I think it ate into the plastic in places. In fact the Ion gun broke off too and I had to superglue it. Notice the missing fins on his shield? Yeah. But it's a 100 dollar kit in Canada and I wanted to salvage him. Overall I'm happy with the final result, and am hoping to paint more Farsight models. 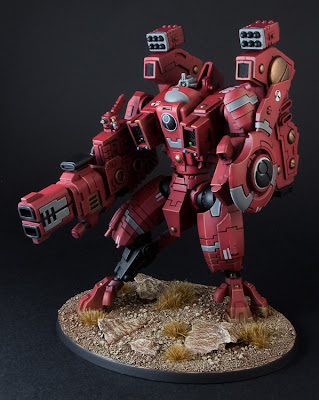