Thoughts on GW and the Hobbit

Hi everyone, I thought I'd weigh in the topic of GW's new line of the Hobbit products. Since they were announced I think there have been a few areas of consensus within the gaming community:

- The products are all very expensive.
- The sculpts seem to be polarizing.
- The need to buy the big rulebook to get certain stat lines and points values has people up in arms. 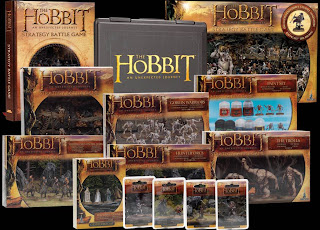 For my part, I was going to take a pass on these. I actually thought the starter box (Escape from Goblin Town) looked pretty cool...but not 150 dollars cool (Canadian). In fact there was even a local store doing a preorder deal at a very good price and I still passed on it.

Then, on release day, I wandered into a different local game store and they had the models out and assembled. BAM - my plastic addiction overcame me and I plunked down for the starter and the Goblin Town box.

I've spent some time reading the basic rules that come in the set and it seems like a pretty fun little rule set! That said, I have no illusions that there will be anyone for me to play it with. In fact having read the small rules I actually want the larger rulebook but again I have to be honest with myself about not having opponents nor time to play really.

The sculpt quality is great in my opinion. I really like the Goblin King, the dwarves and Gandalf are fantastic, and the smaller goblins are true to the movie designs. I think part of the problem is the goblins don't really hold up well with big, zoomed in photos. But with a decent paintjob I think they look great on the tabletop. I've been painting some up (pretty rapidly, using the airbrush).

I also really like the scenery. It's hard to explain why...it's just flat planking and platforms...but I still dig it. I'm sure you can make this with wooden sticks or stir sticks but (a) I wouldnt have the time or inclination and (b) I have doubts it would look as good as this. I'd love to build a goblin town layout like in the rules and White Dwarf but that's a lot of sets and what appears to be foam rock etc :)

So overall I think the starter box is a good set, although admittedly it pushes the envelope as far as it will go on the price.

The trolls have grown on me too - I didn't buy them yet, but I think they are pretty nice and again true to the designs in PJ's film.

I'm less interested in the orcs, but I can see that those are pretty nice plastic sculpts as well. I'm not very interested in the finecast models (I'm really trying to avoid FC as a general rule, it's really brittle stuff) and obviously the white council set is a bit obscene.

I guess in summary - if you are interested in the Hobbit and/or painting the models and getting some neat scenery that works for a variety of games, the starter seems like a good buy. The rest are up to personal taste and financial situations :)

Here's a totally impromptu WIP shot from my painting station. 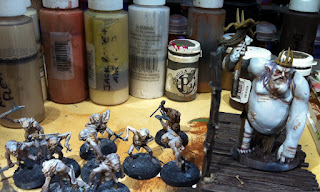 Email ThisBlogThis!Share to TwitterShare to FacebookShare to Pinterest
Labels: Hobbit